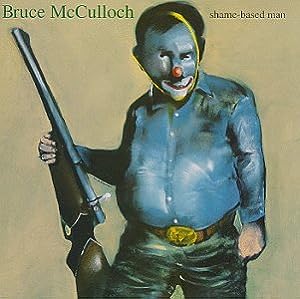 Bruce McCulloch has marked himself in my mind as one of the most successful Canadian comedians of my childhood, and this album is no exception to this reputation. The album did, however, come to challenge my perception of his mental state. His cynical, candid depression is something I have grown increasingly familiar with as I have grown up. And despite his biting sarcasm, and his wicked energy - the listener realizes he is an utterly real human who is willing to strip himself bare to laugh at his pain.

His songs simultaneously praise, and question his devotion the things he loves (see: "Doors", "Eraserhead"), and the people he has loved (see: "Grade 8", "Our Love.") His album is a composition of the invisible, and substance-related problems he fights. Interspersed with snippets of McCulloch impersonating both radio guests and the radio host. He mocks that which is closest to him, and that which has obviously wounded him in some way.

With unsettling tracks like "Stalking," and "He Said She Said" he delves into some serious relationship red flags. A layer of a fostered machismo invading the album. Juxtaposed to these off-kilter songs is "40 Housewives" about a sort of Feminist revolution. McCulloch, while talking about substance usage ("Grade 8", "Acid Radio", "Eraserhead", etc.), also manages to talk about gender divisions, and their role in relationships.

McCulloch repeatedly in “Not Happy” that he`s “not happy but I`ve got TV.” This is an idea he re-iterates hilariously in “Eraserhead,” one of the albums most startling and brilliant tracks about celebrating one of the most obscure, horror films ever made in a truly petrifying, yet ultimately understandable way. I will spoil neither the movie, nor the song here. Just trust McCulloch in his hysterical rendering of his devotion to the film.  Ideas of inferiority and depression are discussed once more in “When You`re Fat”: a clownishly upbeat song about very specific short-comings that McCulloch satirically employs on other people, instead of himself.

McCulloch even touches on the death of Kurt Cobain in ``Vigil``, interrogating what a vigil actually means, and what factors lead to Cobain`s wide audience, and to the large ceremonies that ensued after his death.

He also includes the classic “Daves I Know,” (a nice little inclusion for all the die-hard Kids In The Hall fans who gave the album a listen, myself included). A song called “That`s America,” also featured on the Canadian sketch show shines some light on McCullloch`s feelings about Canada`s neighbour: a scathing, yet hilarious track.

With other notable tracks like “Daddy`s on the Drink Again,” McCulloch constructs a vision of his home life and family, much the same way he reflects on his personal life, and friends in “Al Miller.”

It is truly difficult to capture McCulloch`s humour in this brief overview. This album has helped me immensely to understanding myself, and McCulloch - a man defined by his attempts to articulate his abstract obscurity, via sharp wit. The album is a culmination of passive-aggression, grief, obsession (in a fandom sense, and in a troubling “romantic” sense) all through the use of simultaneously catchy, and humorous lyrics. I recommend it to Kids in the Hall fans and anyone needing a good, uncomfortable laugh.