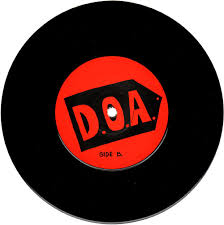 D.O.A. Prisoner/Thirteen (1978)
D.O.A. is the much revered (and rightfully so) rotating puzzle of a band that has gone on to influence anyone from muscly American hardcore fanatics to scrawny Saskatchewan punk kids like me. This single cements the band's reliably sludgy, always smartly structured political punk anthems.

"The Prisoner" protrudes the subconscious with its sawing guitar, and out of breath vocals - continually permeated by gnarly backing vocals from the incomparable Mr. Joey "Shithead" Keithley (the only fixed feature in the D.O.A. dining set). The drum beats are in my mind 'lively,' the resuscitation breaths to the (anti)-artfully provided vocals. The song ends with the question: "is everybody around here really a bunch of wimps?" A question we can all ponder, as we measure our bravery against the fearless career and discography Keithley and co. have set forth into the world.
"Thirteen" is a track that shows evidence of John Lydon/Rotten's impact on Canadian punks during the '70s. It features a bouncy, repetitive guitar riff (one that would fit nicely under a 'hardcore' umbrella - a genre which D.O.A. helped to define). It is a song devoid of excess, strictly pacing along drums and stinging lyrics ("I'm one big zero"). It is a minimalist masterpiece with romantic lyrics that devolve into those of self-loathing. An emotional stain on the minds of disillusioned, and burgeoning punk youth. 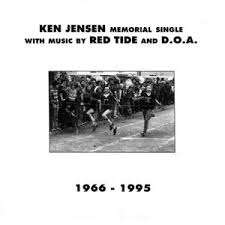 Red Tide and D.O.A. Ken Jensen Memorial Single (1966-1995)
This compilation is a look back at the life of Ken Jensen (a roadie turned punk drummer) involved in the Vancouver punk scene - mingling with the likes of D.O.A., The Hanson Brothers, and Loosenut (a Black Flag cover band). The album's booklet mentions Jensen's tragic death in a house fire, and that without his loss, this record would not have been made. It is a beautiful retrospective that looks at Jensen's best moments, and allows us to hear some of his most memorable songs. Jensen is best described by Craig Sean Bougie in the write-up as a man who "...just sat back and drank beer, smoked, and fell in love on a nightly basis, just like the rest of us."

"R.E.D." is a haunting song, featuring rewinding riffs. It features non-descript riffs that evolve into soulful solos where Ken's stomach screams become pronounced and ever-lasting. The violently loud, and pronounced drum beats help to emphasize the punk vibes beneath the seemingly "power rock" guitar make-up.
"Masks" is a magnetic song that leaves hypnotic vocals to linger in our cochleas. The vocals, and lyrics contrast the swinging symmetric music that pulsates behind. Drum rolls help to emphasize the idea of starting/restarting that the sound plays around with. The song belongs in a hardcore anthology, as an honorable mention as a venture away from formulaic convention. The song has an energetic pulse that drops you as quickly as it picks you up. Leaving you to think in silence about the controlled chaos that has just seeped into your jealous ears.
"Knots" is a sinister song about feeling like a beast. Ken sings lead vocals, allowing his inner demons to show as he sings about feeling like a monster who needs restraining ("tie me down"). The screams in the background perfectly punctuate the frantic beats, and power chords utilized skillfully. The song has memorable verses that wind carefully to the climactic conclusion: a cymbal settle-down, as the guitar quiets - ultimately resolving in the resolution "Masks" promised but never provided.
"Overtime" is the quintessentially Canadian hockey tune - although it features some ska vibes. It has a jaunty optimism stirred both musically and with Ken's lead vocals. The song is very reminiscent of the Hanson Brother's tunes about hockey. The song is thematic, joyous, and wreckless: a great ending to the this telling of Jensen's story. 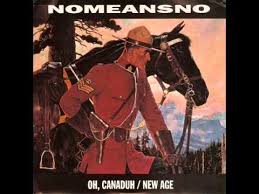 NoMeansNo Oh Canaduh
NoMeansNo is a vitally important part of Canadian (and world) punk history. Providing the punk scene with some "old" underdogs who could really play. This single is a nod to their contemporaries, and influences, creating a historical artifact for young(er) ears to hear and understand.

"Oh Canaduh" opens with a rendition of the Canadian national anthem on guitar - piquing the interest of questioning ears. It features a satisfying guitar riff, that leaps like a snake coiling and recoiling. It features tinny, relentless drums and united backing vocals that make ignorance of the song's content impossible. The song was originally written and performed by the Subhumans (another Vancouver band) who were known for their activist-turned-violent songs and actions. The guitar solos are measured and not excessive - utilizing a minimalist punk vibe that NoMeansNo went on to echo in their career. The song interrogates strictly positive notions of Canada, revealing a dark underbelly: "can't find a job/can't pay your rent.../Oh Canada, what's wrong with you?" Although, the Subhumans would later do some... not commendable things in regard to activism (be sure to look that up, it's pretty frightening), this song is a snapshot of their more effective, more innocuous activist agenda.
"New Age" is a perfect punk anthem. Which can only be expected, since it is a D.O.A. cover. This is a combination everyone obsessed with the Vancouver punk scene (me!) would dream of. The song features claustrophobic drums, and damn good Keithley impression. The guitar spirals around the piercing noises that emanate wrecklessly like punk shrapnel. The lyrics are as poignant as one can come to expect from the punk philosophers: "it's a new age/... one that I can't use!" 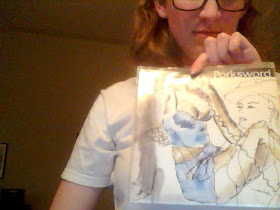 Porksword Boxcar/Hutterite Rock
"Boxcar" is easily of the best songs that came to influence my musical persuasion and obsession. It is a bouncy memorable tune about reputation that helped to establish the reputation of this Saskatoon band. A careless explosion of resounding, and refreshed riffs, guided by a simple but staple drum track. The song was recorded New Year's Day, 1998 at Audio Art, Saskatoon. I thought the song was revolutionary before I found out it was from Saskatoon - after I found out they were local, my head almost exploded with excitement! Here is a band, playing some of the most important music, that would go on to sculpt the now-flourishing punk scene we enjoy. This song is one I find myself singing almost daily: "everybody said she was a boxcar bitch but me." It's a story about a mysterious, yet infamous girl with a lingering reputation and, it's one I simply cannot get out of my head (in the best possible way).
"Hutterite Rock" is a heavier song on the single. It was recorded December 27, 1997 at Amigo's in Saskatoon. The drum beats are reminiscent of a heart arrhythmia: a paradoxical spontaneity in beat-keeping. This song is the essential Satanic anthem for those perhaps most closely viewed by God. My question is, as the song asks repeatedly: "how many Hutterites do you want?" And my the amount of times I've replayed this song, I'd say I want a significant amount of Hutterites: "hutterite/hutterite/hutterite/hutterite."

Summary: these singles are only fragments of a heavily unified music scene that we Canadians can be proud to share. These bands have guided my musical development, my ethical (well, maybe not the Subhumans)/punk ethos, and have emanated from my bedroom time and time again. Keeping these legacies alive isn't hard if we listen to, and adopt the revolution our punk forefathers started rolling for us. PUNK ISN'T DEAD. VIVA VANCOUVER! VIVA SASKATOON!