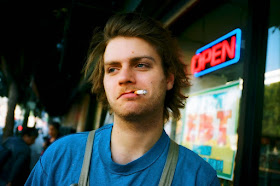 Mac DeMarco at O'Brians Event Centre, Saskatoon. November 4, 2015.
Mac DeMarco is often compared to the Beatles. This comparison is apt, although negates mention of his religiously unpretentious persona (for one, he hasn't compared himself to a messiah... yet) - somehow a poor fit for a "big time" venue like O'Brians. Apparently, last year DeMarco filled up Amigo's, so there's pretty good evidence DeMarco's nonchalantly brilliant aesthetic is one this city craves.

Admittedly, I was not a big DeMarco listener before the show (I tried to cram his entire discography into my cranium in about two days - a feat that is quite possible if I wasn't so lazy, though I managed to get through a decent amount.) Personally, I believe this to be a good approach: to be surprised at the artist's unknown, and perhaps unmentioned talents from uneducated ears. To have their live renditions of pre-conceived songs be the versions that etch themselves irrevocably on your brain.

DeMarco's live presence was unkempt, yet still cohesive: chaotically poetic. I enjoyed each bleach-y tune, singing along even though I may have only correctly interpreted a few words. In my mind, this is DeMarco's success: breathing a casual indie lifeblood into a cavernous centre with cameras and security. His bandmates had perfect timing, and a difficult-to-explain vigor behind each controlled, or chaotic drum beat or guitar strum. They played well as a unit: a memorable wash of smartly-sculpted, though messy "Edmonton sound" (as if that is a thing.)

Overall, I am hooked on DeMarco's memorable surfy jams, his gap-toothed smile, and his sloppily-sung, though carefully crafted, lyrics - crafting an intricate lace-like beauty to a twangy guitar motifs. Most notably, DeMarco should be recognized as accessible (although maybe not financially, tickets were $35, drinks $6 each), through his clever utilization of music staples, his unique image - banishing beauty from the realm of musical success, and his sheer talent - artfully playing jaunty tunes with soothing lyrics, or mingling chaotic beats with  soulful, romantic impressions.

P.S. It has been awhile since I've heard of an Indie artist starting up fashion trend as well (aside from Bethany Cosentino's fashion line.) I heard several utterances of "nice denim jacket" throughout the night. 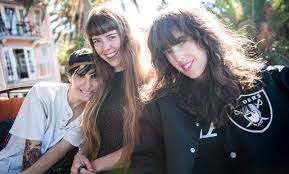 Although DeMarco was fantastic, he is perhaps shadowed by his opening act, the Courtneys. The band is a happy, seldom sappy, surf-rock "girl band" that sing about love at a frantic pace. Their drummer, Courtney (all of their names are Courtney - an obvious Ramones nod, much like the Donnas) is also the lead singer.

The band got everyone on the right track with their engaging, energetic beats: definitely a band to watch out for (Bonus: the drummer looks a bit like Patti Smith, and a member of Sloan, as my friend pointed out, so maybe it's genetic?) Be sure to check them out: I can't seem to find the words for their chirpy 60s sound that initiated my joy (along with alcoholic encouragement). 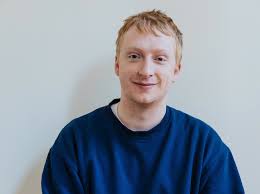 As well, we were witness to the blurry performance by Alex Calder (DeMarco's keyboardist). His music, though atmospheric, was basically a less intelligible version of DeMarco's music: with some obviously catchy riffs. Likely a little look-up before seeing him would have cleared me up on his aesthetic and musical prowess, but I was pleasantly surprised regardless. If you like DeMarco, he is also worth a listen.
- K. MacFarlane